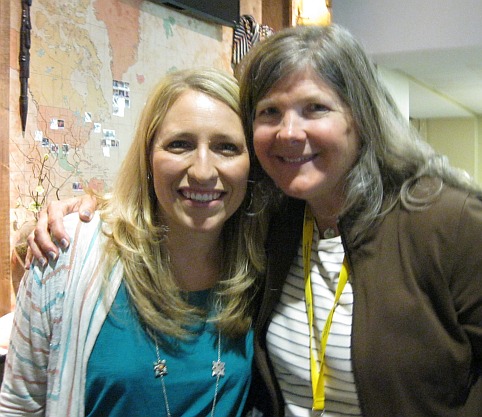 I had the privilege of attending a brunch and concert at Mitchell Road Presbyterian Church, June 2013.  I was attending the PCA General Assembly as an exhibitor with Five More Talents.  A few months ago, I had signed up for the concert and brunch, not realizing Laura Story was going to be there.

Driving in the rain a couple years ago, I heard the song Blessings playing on the radio.  I began to cry and wondered who wrote it and if I could ever find all the words.

God had a bigger picture and I was totally surprised to have the privilege of sharing that time with Laura Story. I had my picture taken after we talked a few minutes.  Laura also autographed my CD.

When Laura Story penned her now-famous song “Blessings,” she could hardly have imagined the way it would affect people from across the globe; or the acclaim it would bring.  Laura won a GRAMMY award for the song – Best Contempary Christian Song in 2012.

At the brunch that morning, Laura shared about her husband’s diagnosis of a brain tumor going into the second year of her marriage.  She explained that his vision and memory are still impaired.  In the midst of disability, in the context of going through this, Laura sings the song, “Blessings.”